No matter how large your project is, it will always be based on the investor’s requirements, restrictions imposed by law and technological assumptions. With object-oriented programming, you are able to automate the repetitive and time-consuming activities that a designer always had to do instead of doing design work, and create parametric geometries based on different conditions.

This is how Dynamo works – it changes the depersonalized language
programming on graphic designs, solids and images that correspond
design assumptions. It is an advanced creation tool
complex structures in the BIM environment (Building Information
Modeling).

Who Will Benefit from Object Oriented Programming?

BIM software is defined as an interactive process based on object-oriented programming. It will be used primarily by the following industries:

The BIM environment allows not only for the graphical representation of processes, but also for the exchange of information between project participants. As a result, at the very beginning of an investment that includes the formation of an idea, both investors and engineers have a powerful tool to simulate, analyze and manage individual investment parameters.

The Generative Desing technology allows you to generate many variants of an object on the basis of given boundary conditions. Thanks to this, you do not have to manually change individual parameters each time to see a new result of your work. It is a huge time saver and a simplification that makes you work faster and more efficiently. After entering the target conditions, the software creates only those variants that meet your assumptions. Thanks to the cooperation between Dynamo and Generative Desing, you can transfer the power of the tool to the working environment of a native program (eg Revit, AutoCAD or Navisworks) with a few simple nodes.

Are you wondering where in Dynamo you will use the possibilities of Generative Design?
Thanks to this technology, you can quickly and easily test many solutions, such as:

You would spend many hours of work doing such activities with no guarantee that you will find a solution to the problem. By combining Dynamo with Generative Design, you use the power of mathematical creation of geometry and automated calculations that will allow you to get the best result.

1. How does the Dynamo work?

The Dynamo module can work in two ways:

Thanks to the plugin, you can work in visual programming mode, combining selected elements and creating custom algorithms for calculating data or processing geometry. And all this without knowledge of programming and without writing a single line of source code.

By using Dynamo, you have access to a thriving community. On the forum you can discuss your doubts and problems, find ready-made answers to your questions or share your achievements.

Are you looking for concrete examples of what you can do with the Dynamo module?
Here are just a few of them:

That’s not all. Thanks to Dynamo you will be able to obtain
comprehensive information on each element of your project. Even the data
which other BIM programs cannot cope with.

In Dynamo, the user interface (UI) consists of five elements, each of which has a different function. The largest is the working area. It is here that graphic visualizations of created programs and entered data are created.

The next item is the menu. As with all Windows programs, here you will also find drop-down buttons that are used to manage files, perform operations on them, and configure the program. Right next to the menu are toolbars, i.e. specific functions available with a single mouse click.

The UI also houses a library – a collection of all nodes loaded into the program – both standard and non-standard ones, as well as packages that act as plug-ins in the program.

The last item is the launch bar. After pressing the Dynamo button, it tests if it is correct and runs the created program. The entered data goes to the wires between the nodes, and you can observe the graphical results of the operation appearing on the screen. 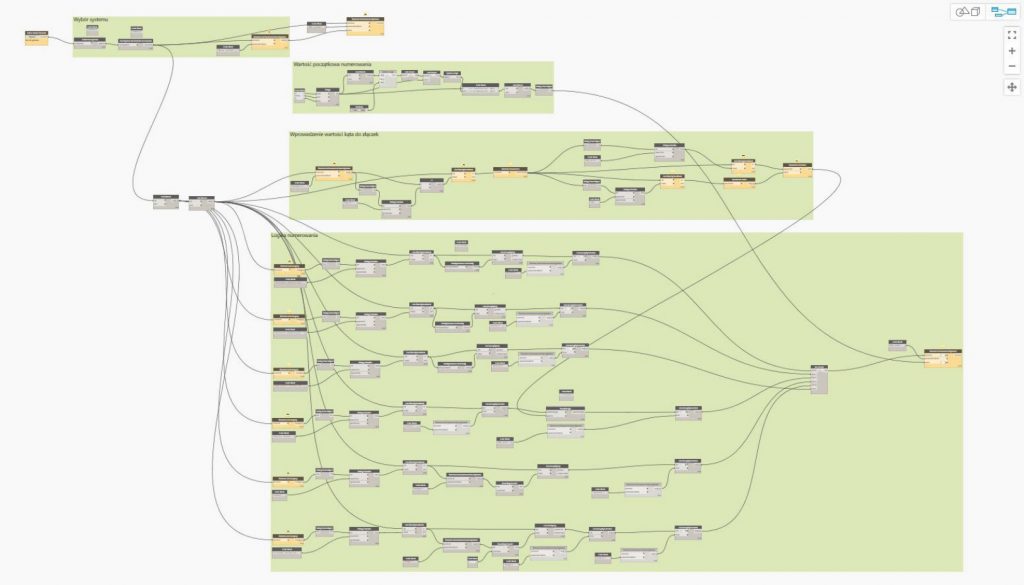 In the Dynamo environment, you operate on nodes. These are objects created on the workspace that perform certain operations, defined by a program or a user. This can be a simple task like storing numbers or calling functions, but also creating or processing geometry. Most of the nodes are described by five parameters that we can modify as needed. The nodes are connected with each other by wires connecting specific operations and code fragments, allowing the creation of a network of dependencies between elements.

Knots and wires represent what programmers get
by writing the source code. With one difference: in Dynamo it is a lot
simpler and more readable.

To create advanced visual programs, you need to understand what kind of information Dynamo processes. We include among them:

Computational geometry is a way to create models from data – both simple and complex, as well as guided. Dynamo can do this because, like any programming language, it has a geometry kernel that is used to design models, automate design, and create iterations. What does geometry allow? First of all, to analyze the shape and size of solids and figures, but also to assess their mutual position and parameters.

That’s not all! In addition to the already mentioned Mesh Toolkit Dynamo
allows you to import geometry from a DWG file. You can yourself
select which elements of the file structure and model layer to be displayed
transferred to the Dynamo environment. You don’t need to import the entire file,
if only surfaces or curves are enough for you. 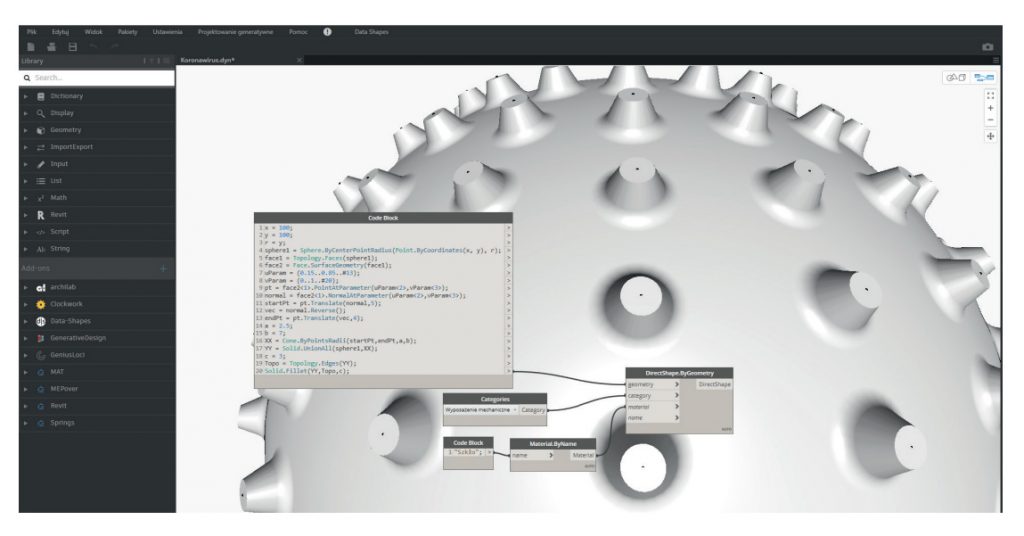 5. Designing with the use of lists

By using the Dynamo environment, you can organize data in the so-called lists. They are equivalent to folders in the operating system and contain data (items) grouped parametrically. Designing with the use of lists allows you to perform operations on grouped data, such as their mixing, sorting according to a specific criterion, dividing and dividing into parts or selecting a specific element. You perform each operation using specially defined nodes.

Additionally, lists can be closed to each other. They are known as n-list. These are advanced operations that allow you to map lists, work with two-dimensional and three-dimensional lists, and create mappings and combinations.

6. What programming language does Dynamo support?

The Dynamo add-on supports the Design Script programming language based on the so-called code blocks that allow you to translate the programming language into an effect visible on the screen. It is a text interface combined with a graphic representation, in which you can freely modify the type and method of entering the input data.

Design Script primarily offers simple syntax, readability and brevity, as well as feedback on small snippets of code. How many times have you found the environment to report bugs after writing the entire application? Programming doesn’t have to be that way! Code blocks provide a unique ability to smoothly transition from the programming language to data nodes, and even create your own transition between nodes. Design Script also allows you to create geometry.

Thanks to special functions called constructors, you can create complex geometric solids and curves of any shape.

Dynamo allows you to create nodes using language
Python programming. It is distinguished by simple syntax and rich possibilities
technical, incl. many methods available for writing conditional statements
and looping. By using Python, you can code with a few lines
replace many complicated knots.

What is the Design Script syntax?

Design Script is based on the syntax with no spaces in dot notation. This means that you can easily distinguish individual elements from the calling methods or call a node. Furthermore, code blocks offer several methods with short syntax to help you manage your data.

In code blocks, you can also create functions and call them anywhere. This “master block” requires no wires and can be positioned anywhere on the work area graph.

7. Why is it worth choosing Dynamo?

Do you deal with designing installations, buildings or optimizing the flow of processes in a large company on a daily basis? You are probably wondering if the Dynamo environment is for you and why should you bet on it? Here are some reasons:

You are probably wondering if you really don’t need to be a programmer to understand and use all the necessary functions? A clear, graphical programming interface based on nodes and wires allows you to automate the most difficult tasks. A well-thought-out object-oriented programming system facilitates full parameterization of all data.

Thanks to Dynamo, you will not only solve design problems, but also analyze documentation, coordinate data flow processes, simulate and analyze construction and installation projects.